Magriel's first column appeared in
the New York Times June 9, 1977 From June 1977 to July 1980, Paul Magriel wrote a weekly column on backgammon for the New York Times. At the time, Magriel was one of the top minds in the game — and a great writer. He had a unique ability to cut the important features of a position and write about it in terms that anyone could understand.

Though he was 1978 World champion, Paul Magriel was even more famous for the textbook he wrote about the game two years earlier. His 400-page book, titled simply Backgammon, was a breakthrough. Nothing compared to it in terms of comprehensiveness and systematic style of presentation. Aimed primarily at beginning and intermediate players, Backgammon has continued to be praised by students of the game decades after it was published. It's an excellent foundation for anyone who wants to take up the game. 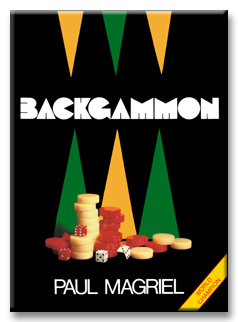 Backgammon, Magriel's seminal
book, was published in 1976 Magriel applies the same approach to his New York Times columns. He reminds us that good backgammon players rely on skill and strategic sophistication rather than luck. Each column is a tiny lesson. A position and roll are presented and the reader is invited to find the correct checker play. Then, in his clear-minded way, Magriel takes apart the position and focuses on its fundamental aspects. He leads the reader through the steps an expert takes to get at the heart of the problem and deduce the correct answer.

But beware. Backgammon knowledge in the 1970's was still somewhat limited by today's standards. While much of Magriel's analysis holds up even after 35 years, he does get some positions wrong. Backgammon is not an easy game, and some of the problems chosen for the columns are hard ones. In one or two cases, it's hard to imagine an expert making the recommendation Magriel made. It shows how far backgammon knowledge has come. In the 1970's, backgammon analysts were still feeling their way. A lot of the best material on the game was not written until the 1980s.

And then there are the bots. The introduction of high quality neural-net backgammon programs in the mid 1990's led to a revolution in backgammon analysis. Computer rollouts are now considered highly reliable for most types of positions. And computers make it much easier for experts to try out variations of a position to see what effect small changes have on the overall equity.

This is a tool Magriel didn't have at his disposal. Back in the 70's, there were no computers. Backgammon analysts were flying without a net. You couldn't just pop a position into your favorite bot and see if it agreed with your assessment. And so mistakes slipped through.

To keep readers from learning the wrong lessons, I have included computer rollouts with each column. As you read the column, if you disagree with one of Magriel's conclusions, check the rollout at the end of the column. Maybe it is you who are right and Magriel who is wrong!

The Index Page lets you sort articles by
date, title, cateory, tactic, or error. Or if you prefer to simply skip the columns where Magriel errs, here is what to do: Go to the Index Page and click on the "Error" heading. That will sort the columns according to their error (the difference between Magriel's choice and the rollout's choice). Now simply scroll past the columns that have errors and what's left are the columns confirmed to be correct by the rollouts which, happily, is still a majority of them.

That's not to say you can't learn from the columns where Magriel was wrong. Usually the logic he used was correct but some other overriding concern made his conclusion wrong. Figure out what the other overriding concern was. Then try making modifications to the position to see if you can turn it into one that makes Magriel's analysis correct. Now you've got something to learn from!

Many of Magriel's columns included news about the game and coverage of major tournaments. This was an interesting time for backgammon. The game was growing quickly, major tournaments were being established, and players from other mind sports such as bridge and chess were coming on board. Some of the great talents of backgammon were just starting to make a name for themselves at this time. Click on the icon to the left for a complete alphabetized list of people mentioned in Magriel's columns.

The columns are presented here in the same order as they appeared in the New York Times. So grab a chair, relax, and enjoy your trip back to the 1970's. The first column introduces the concept of the "tempo play."

Index to the columns

People mentioned in the columns